project.  The team started the

Joel and Katie started talking with Isman, a fourteen-year-old boy.  As a part of any conversation, staff always ask what they can pray for someone.  They learned Isman had been living on the streets since he was seven and had been visiting the drop-in-center for over six months.  Isman was waiting for a sponsor who will help pay for his school expenses.  Their conversation ranged from football to the Bible.  Isman did not understand that Jesus had died for him.  “Joel explained how Jesus died to pay the penalty for our 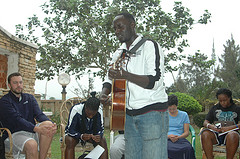 sin because He loves us, and asked Isman if he had ever prayed to thank Jesus for dying for him.  Isman said, ‘No, but I would like to do that sometime.’  Joel asked him when he was thinking he might do that, and Isman basically said he’d do that any day now.  Naturally Joel suggested, ‘What about right now?'”  Read the rest of the story here.

That afternoon their game was played at a Muslim high school for girls.  The opportunity illustrated the power of sports to cross spiritual and cultural barriers so the gospel can be shared.  After the game, all the AIA players gave gifts to the girls from the school and talked about their faith in Christ.

These two stories are just a snippet of what God accomplished on this trip.  Pray for Isman and the growth of so many others.

Her Decision to Die by Karen Rogers